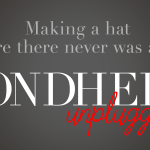 Musical director John Fischer and host Rob Maitner carried the live and live-stream audience through a tiny fraction of Sondheim’s playbook. Both entertained all participants with songs from West Side Story, Saturday Night, A Little Night Music, and others.

Maitner shared that Sondheim was a protégé of Oscar Hammerstein, who was a strong, father-like influence in Sondheim’s life and encouraged his love of musical theater. Maitner said, “concerts popped up worldwide when Sondheim turned 80,” which was the inspiration for Sondheim Unplugged.

The outstanding actor and singer Lucia Spina (Into the Woods 2022 revival) started the evening with one of Sondheim’s early hits, I Feel Pretty, from the 1957 musical West Side Story. Special guest Ramona Mallory (Anne, A Little Night Music Broadway revival) followed with another song from the same musical Something’s Coming, with music by Leonard Bernstein and lyrics by Sondheim. In addition, she sang one of the most unforgettable versions of Maria during the evening.

With his best Brooklyn accent, Jacob Hoffman sang a hysterically funny and corny rendition of Gee Officer Krupke, another West Side Story favorite, which brought resounding applause. Leonard Bernstein crafted the lyrics with music by Sondheim; they collaborated on many pieces throughout their careers.

Kate Loprest dazzled with the song So Many People from the musical Saturday Night. The musical would have been on Broadway from 1954 to 55 and would have been Sondheim’s debut, but the producer died, and they shelved the project. Saturday Night was first performed at the Bridewell Theater, London, followed by a brief run in Chicago and off-Broadway.

Maitner shared more exciting facts about the musical, A Little Night Music, which was based on Ingmar Bergman’s 1955 film Smiles of a Summer Night. One should not forget one of Sondheim’s most famous and continually recorded songs, Send in the Clowns, was first featured in this 1973 Broadway production. That timeless song has been performed around the globe for decades.

Actor James Seol sang The Glamorous Life, another famous tune from A Little Night Music. Seol has a pleasant voice.

Loprest entertained us with her silky version of the 1964 tune There Won’t be Trumpets from the musical Anyone Can Whistle. Next, special guest Nicholas Rodriguez (Company Broadway revival) graced us with the tune Everybody Says Don’t, whose lyrics give us something to ponder about life. Rodriguez also performed Someone is Waiting, from the musical Company.

Miki Abraham closed the evening with Marry Me A little, from Company, with a standup round of applause to follow for an eventful evening. Sondheim wrote music and lyrics for 16 full-length musicals, writing over a hundred songs, and his legacy lives on with today’s talent that continues to perform his best-loved lyrics.

The running time is approximately 60 minutes with no intermission.

Swinging big band music was hot in Manhattan! From the moment the Tony Kadleck Big Band began their set at the Birdland Jazz Club, we tapped our toes and jumped to a tasteful, tight, polished sound, solid rhythm section, cats burnin’ solos, and sophisticated superb arrangements by trumpeter and band leader Kadleck.