The Robert Cray Band at The Mayo PAC 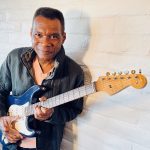 MORRISTOWN, NJ – The mix of Blues, Soul, and Rock’ n’ Roll filled the air at the Mayo Performing Arts Center (MPAC) on September 16th when The Robert Cray Band entertained a filled house.

Robert Cray, the five-time Grammy winner, inducted into the Blues Hall of Fame, and winner of the Americana Music Awards Lifetime Achievement for Performance, has transformed traditional blues into a more modern sound, which was apparent by the diverse age group in attendance. He has produced over 20 albums as of this date.

Cray began playing around the country in the 80s and is a lover of Fender guitars. He changed his instruments several times during the evening, depending on the melody of each song.

Cray opened the show with his well-known song Leave This Town. The head and body movements from side to side started to the beat of the music, and the audience gave a resounding amount of applause. But they were ready for more.

Cray didn’t disappoint with his song Can’t Make Me Change, a slow, swaying piece that featured a keyboard solo by Dover Weinberg. If you closed your eyes, you were transported to the places where blues originated in the Deep South back in the late 1800s. This song hit the high and low notes, with Cray showing his fine guitar skills and style. His voice is smooth and sultry.

The song I Don’t Care gave rise to an audience member to cry out “Play all night.” The band obliged.

Cray said, “We’re going to go way back,” as he sang his 1983 hit Phone Booth, a tune that first brought accolades to his contemporary Blues sound back then. The song featured an extended guitar instrumental, which was met by resounding cheers. He also played You Had My Heart, a piece that highlighted a whining guitar solo slowly fading away at the end.

Instrumental solos abounded throughout the 90-minute concert. This gave concertgoers the opportunity to hear the talents of Cray, as well as Richard Cousins on the bass, Les Falconer on the drums, and Dover Weinberg on the Hammond keyboard, who I introduced earlier.

In a tribute to Booker T. & the M.G.’s, Cray and the band played Hip Tight Onions, entertaining the audience with swagger from Cousins that further increased the pleasure of the performance.

Cray and the band received a rowdy standing ovation, and when they returned for an encore, the crowd was treated to a memory-lasting version of The Forecast Calls for Pain and Time Makes Two, a tune with a mournful wail on guitar with heavy drums.

The many songs played throughout the evening were just a warm-up to a fantastic lineup of melodies and words Cray has assembled over his career. Although the concert was over, many in the audience could have remained all night to hear more.

The Robert Cray Band was phenomenal.

Readers may also enjoy our reviews of Cheek to Cheek, Jeff Harnar, Love, Sex and Real Estate, and Fastened to the Moon.

The Robert Cray Band at The Mayo PAC