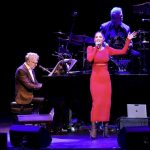 With a resounding crescendo of drums, guitar, and electric keyboard, an extensive list of awards Canadian musician, composer, and record producer Foster has garnered over his career was announced. He earned 16 Grammy Awards, has 3 Best Original Songs nominated for Academy Awards, a Golden Globe, and sold more than a half-billion records.

Foster bopped on stage in a dark casual suit and sneakers and had a youthful, comedic presence. He started the program with an instrumental of Carol of the Bells in honor of his and McPhee’s first Christmas album Christmas Songs.

Foster’s first song, The Love Theme from St. Elmo’s Fire (Man in Motion), wasn’t initially written for the movie. However, the story of Canadian athlete Rick Hansen, who was a wheelchair user and traveling the world to bring awareness to spinal cord injuries, inspired Foster, he said. Hansen’s journey, entitled Man in Motion, influenced Parr to write the words for the film and collaborate with Foster.

Through the miracle of technology, Kenny G appeared on the onstage screen and played sax while Foster played piano. The 1985 chart-topping song rang through the theater, with clips of Hansen on his journey flashing on the screen. Knowing the story behind the words gave the audience a chance to pause and appreciate Foster’s and Parr’s talent.

Foster introduced tenor Fernando Varela, whom he discovered in his Born to Sing competition. Varela now travels the world with Foster and McPhee, and the audience is privy to why. Varela gave chills to the audience with the extraordinary depth of his singing voice.

Josh Groban appeared on the screen, telling the audience he was just there for support as Varela sang You Raise Me Up. Foster produced the song in 2013, and Groban’s version hit number 1 on Billboard’s Adult Contemporary Chart. Groban was, at first, a listener to Varela’s astounding rendition, but he kept chiming in, much to the happiness of the concertgoers. It was a breathtaking and powerful performance, and Foster said, “If I had a voice like that, I wouldn’t need him.”

McPhee slinked onstage in a striking, tight-fitting red dress and high heels she complained and laughed about during her performance. Foster offered to take them off. Instead, she quickly said “I love you” to her husband and explained how they met and married. Then, she launched into a seductive version of Arthur Hamilton’s Cry Me a River, and her talent spellbound the audience.

Classical crossover singer Pia Toscano, who is touring with Matteo Bocelli, stunned listeners with her version of The Power of Love. The song reverberated through the hall, and for the entire tune, if you closed your eyes, you thought Celine Dion was singing. That’s how good Toscano is and why Foster and McPhee picked her for the tour.

Foster reminded all he wrote multiple hits with Chicago’s Peter Cetera and introduced his multi-talented band. Nashville native Gary Lunn was on guitar, Foster’s musical director Boh Cooper was on the keyboard, and John “JR” Robinson was on the drums. Robinson has played on 20 number-one pop songs; Foster and Robinson played five from the list. They included Michael Jackson’s Rock With You and Don’t Stop Til You Get Enough, Steve Winwood’s Higher Love, Chaka Khan’s Ain’t Nobody, and Lionel Richie’s All Night Long.

Foster brought onstage New Jersey’s own Jessica Vosk (Elphaba in Wicked), who sang a resonant version of Don’t Rain on My Parade.

McPhee was back onstage singing Santa Claus is Coming to Town and thrilled the audience with her dancing to the rhythm. McPhee did a digital duet of The Prayer with Andrea Bocelli, and Varella joined them. One would have thought Luciano Pavarotti was onstage when Varela sang his version of Nessun Dorma.

Foster finished the night with a piano solo he wrote during the middle of the night during the pandemic. Its haunting memory went home with every attendee in the room. This dynamic duo is a must-see during their 2022-23 tour.

Running time is approximately two hours with no intermission.

Readers may also enjoy our reviews of Laughter Comes to Morristown, NJ Ballet at MPAC, and the Music of Sam Cooke and Marvin Gaye.